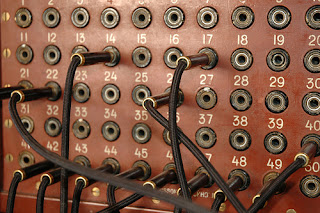 Standard interfaces are all around us, and enhance interoperability between devices created by different organizations. While some standard interfaces are quite niche in nature, others, like the unbiquitous phono jack, have been used for many applications that are only slightly related.
When it comes to design and reuse of design IP, using higher-level interfaces (certainly higher-level that just a set of wires) helps to make use and reuse of the IP easier. An IP that connects with the rest of the design via interfaces is easier to understand than a block that has a wire-level interface -- even if those hundreds of wires are equivalent to several high-level interfaces. Connecting an IP with top-level interfaces to the rest of the design is much easier and trouble-free than individually connecting hundreds of signals.
SystemVerilog provides the interface construct as both a design and a verification feature. A SystemVerilog interface describes the low-level signals of which the interface is composed. The ways in which those signals can be used (eg initiator vs target) are captured using a modport.

Chisel provides the Bundle construct to group signals together. While the concept and high-level use of a Chisel Bundle is quite similar to a SystemVerilog interface, there are some significant differences. This blog captures the best practices that I've discovered thus far while describing Chisel bundles for standard interfaces.

While SystemVerilog provides the modport construct for describing a usage of a interface, Chisel doesn't have a similar notion. All signals in a Chisel bundle are given a direction. Bundles may be instantiated as-is, or instantiated 'Flipped' with reversed signal directions.

Chisel bundles can be hierarchical, so a bundle type can be composed of several instances of other bundle types. In contrast, a SystemVerilog interface must effectively be single-level.

At the end of this blog post is a Chisel description of a Wishbone interface, which I'll refer to in the best practices description below.

Describe from the Initiator's Perspective

Collect Related Signals in a Sub-Bundle

Standard protocols are often parameters. For example, the Wishbone address, data, and tag widths are variable. Collecting protocol parameters into a class, instead of passing them individually to the bundle constructor, has two key benefits:

It should be easy for any users of a standard interface to tie-off that interface. In other words, effectively disable the interface. The tieoff() method is used for initiator interfaces. As you can see, tieoff() drives the response signals to inactive values. The tieoff_flipped() method is used for target interfaces. As you can see, tieoff_flipped() drives the request signals (ADR, CYC, etc) to inactive values.

Note that if a clock or reset must be applied to an interface for it to function properly, the tieoff() method can accept handles to these required signals.

The ability to provide utility methods for driving interface signals to pre-defined states helps minimize the code an IP must write. In the case of Wishbone, setting the error-response state is done directly by the set_error() method. Any IP that needs to return an error can call this method to set the appropriate values.

Chisel Bundle for a Wishbone Interface

Posted by Matthew Ballance at 10:24 AM No comments: